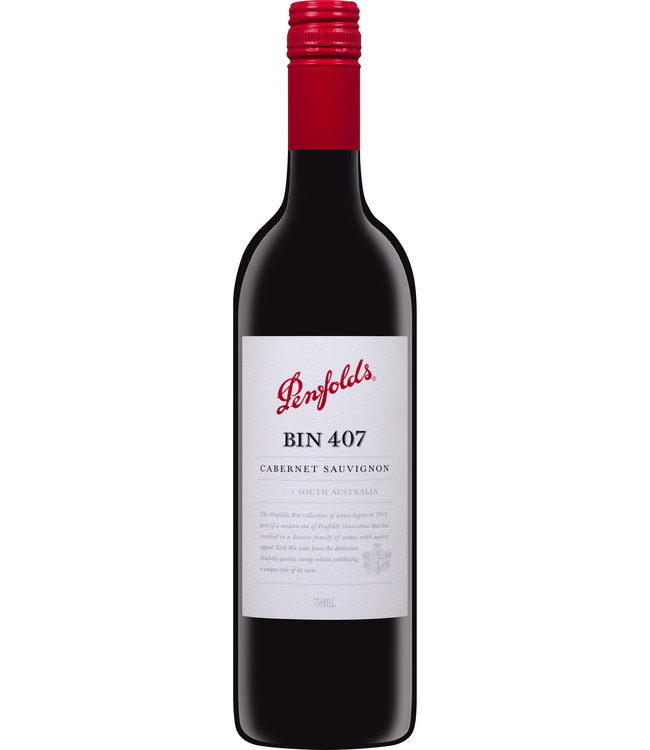 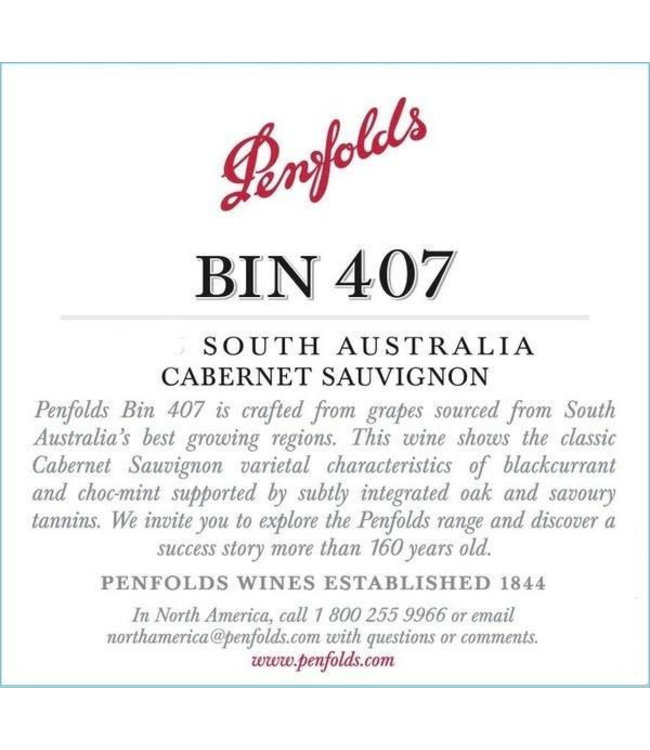 93 James Suckling
This has a duality between some cooler-climate sourcing (some downgraded Bin 707 material went here) and warmer-region fruit from McLaren Vale and the Barossa, delivering impressive flesh and fruit weight. Really builds and fills and holds a wide-open finish.

93 Wine Enthusiast
This is a strong vintage of Bin 407, a multiregional South Australian Cab. It opens with aromas of chocolate, cola, plush plum and black cherry, backed by accents of mint and other crushed herbs. On the palate, fine, chalky tannins slink around silky fruit and savory herbs. Poised and harmonious, this has the potential to age until 2030, but is drinking well right now

93 Wine & Spirits
Supple currant ripeness centers this latest vintage of Bin 407, the less-ambitious sibling of 707. It’s dark and formally structured, the substantial oak notes completely saturated by velvety plum-skin richness. The clean fruit lasts, with cabernet’s herbal identity present, the wine ringing clear as a bell. This should mature well over the next decade.

92 Jeb Dunnuck
Another beautiful effort in the lineup this year is the 2017 Cabernet Sauvignon Bin 407, which is a multi-region cuvée brought up in both French and American oak hogsheads. Classic notes of blackcurrants and cassis interwoven with hints of dill, tobacco, and graphite all flow to a full-bodied Cabernet Sauvignon that’s fabulously balanced, with good acidity as well as ripe tannins. Give bottles another year or two and it should cruise for a decade or more.

91 Robert Parker's Wine Advocate
There's no Bin 707 from the 2017 vintage, so that fruit has been put into the 2017 Bin 407 Cabernet Sauvignon. It's a lifted, perfumed style of Cabernet aged in both French and American hogsheads, with leafy, minty accents and Ribena-like cassis notes. Medium to full-bodied, it has a velvety texture and a soft, approachable finish, tinged with vanilla and dried spices. A blend of fruit from Padthaway, McLaren Vale, Barossa Valley, Coonawarra and Wrattonbully.